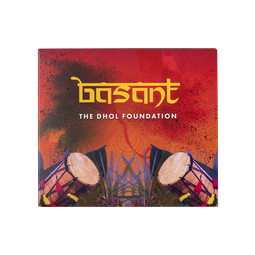 Basant by The Dhol Foundation

The Dhol Foundation celebrate their 22nd anniversary with a stunning new album, ‘Basant’ (Meaning Spring).
The Dhol Foundation is powered by North Indian dhol drums steered by Johnny Kalsi who is the creative mind behind the production. He finds himself surrounded with talent that shines through and sees & hears them as featured artists on the next instalment. Some tracks took longer than others to materialise while other tracks developed a sound that is so natural and an obvious collaborative choice.‘Basant’ has the abundance of those collaborations and include artists such as, Steve Knightly, Angelique Kidjo, Beyant Kaur, Money Saund, Kulwant Singh Bamrah & Locks Griffin.This effervescent and explosive music just keeps surprising as the album moves and swings in a journey that carries you with it. The strong vocals and punchy Dhol Drum Rhythms inject a unique and punchy groove in some tracks while in others, the sound is Dark & Deep.A world music album filled with music of the world wrapped up with the sound and energy of the North Indian Dhol Drum.Producer and Master Dhol Drummer, Johnny Kalsi has taken a new approach when creating the soon to be released album in comparison to creating previous music. The thunderous album is said to take the world by storm. There is something in there for everyone!

Homepage - Basant by The Dhol Foundation