Passions and Tempers: History of the Humours by Noga Arikha

History of the humours 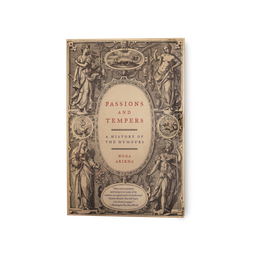 ‘Blending history of medicine with philosophy and psychology, we are taken back to a world where the body was made up of four humours and health or ill health was a result of their balance or imbalance.’ - Rose Byfleet Renaissance Perfume Expert

When Lush first started developing the Renaissance Collection perfumes and Renaissance spa treatment, this book was invaluable for its inspiration and understanding.
In the fifteenth and sixteenth centuries, medicine was based on humoural theory. This is the idea that the body was made up of four humours: blood (a special humoral blood), phlegm, choler (yellow bile) and (black) bile. This reflected the broader understanding of the world made up of the four elements and all living things reflecting their four qualities: hot, cold, wet and dry. They were substances thought to circulate within the body and determine a person’s health, mood, and character.

The theory of humours remained an inexact but powerful tool for centuries, surviving scientific changes and offering clarity to physicians.

This one-of-a-kind book follows the fate of these variable and invisible fluids from their Western origin in ancient Greece to their present-day versions. It traces their persistence from medical guidebooks of the past to current health fads, from the testimonies of medical doctors to the theories of scientists, physicians, and philosophers. By intertwining the histories of medicine, science, psychology, and philosophy, Noga Arikha revisits and revises how we think about all aspects of our physical, mental, and emotional selves.

Homepage - Passions and Tempers: History of the Humours by Noga Arikha