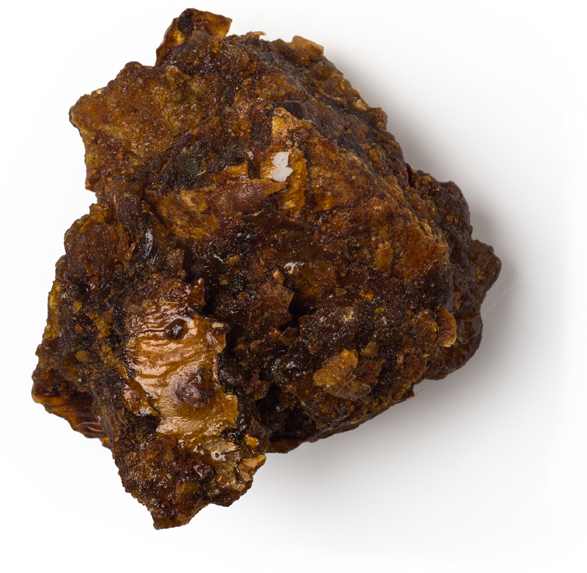 Myrrh resinoid and oil have a spicy, amber and earthy aroma that adds a warm and decadent note to perfumes. In cosmetics, they are valued for their antiseptic, protective and soothing properties, and are considered an excellent way to restore skin’s elasticity.

Myrrh is a resin produced by a small sturdy tree that shares the same name. A relative to olibanum trees, they grow to no more than nine feet in height and inhabit semi-arid regions of Africa and Asia.

A yellow liquid flows naturally from cracks and cuts on the tree’s trunk, setting into brownish-red pieces called gum. Steam distillation is used to extract the essential oil from this gum while the resinoid is obtained by solvent extraction.

Surrounded by legends and spirituality, myrrh has been used for cosmetic purposes, fumigations and embalming since ancient Egypt and is present in many religious texts. Greek mythology even gave the tree a rather sad tale, where a woman named Myrrha was transformed into a tree after having relations with her father. It is said that the flowing resin is, in fact, the tears of Myrrha who cries over her fate - although, for some, the idea of becoming a tree seems quite pleasing.

Lush buy myrrh oil and resinoid from a supplier in Vermont, USA, who works directly with Somali producers, guaranteeing fair prices and sustainable production. Somaliland is an autonomous region in northern Somalia, home of more than half of the world's olibanum and myrrh trees, which have become endangered as farmers are forced to over-harvest due to the low prices they receive.