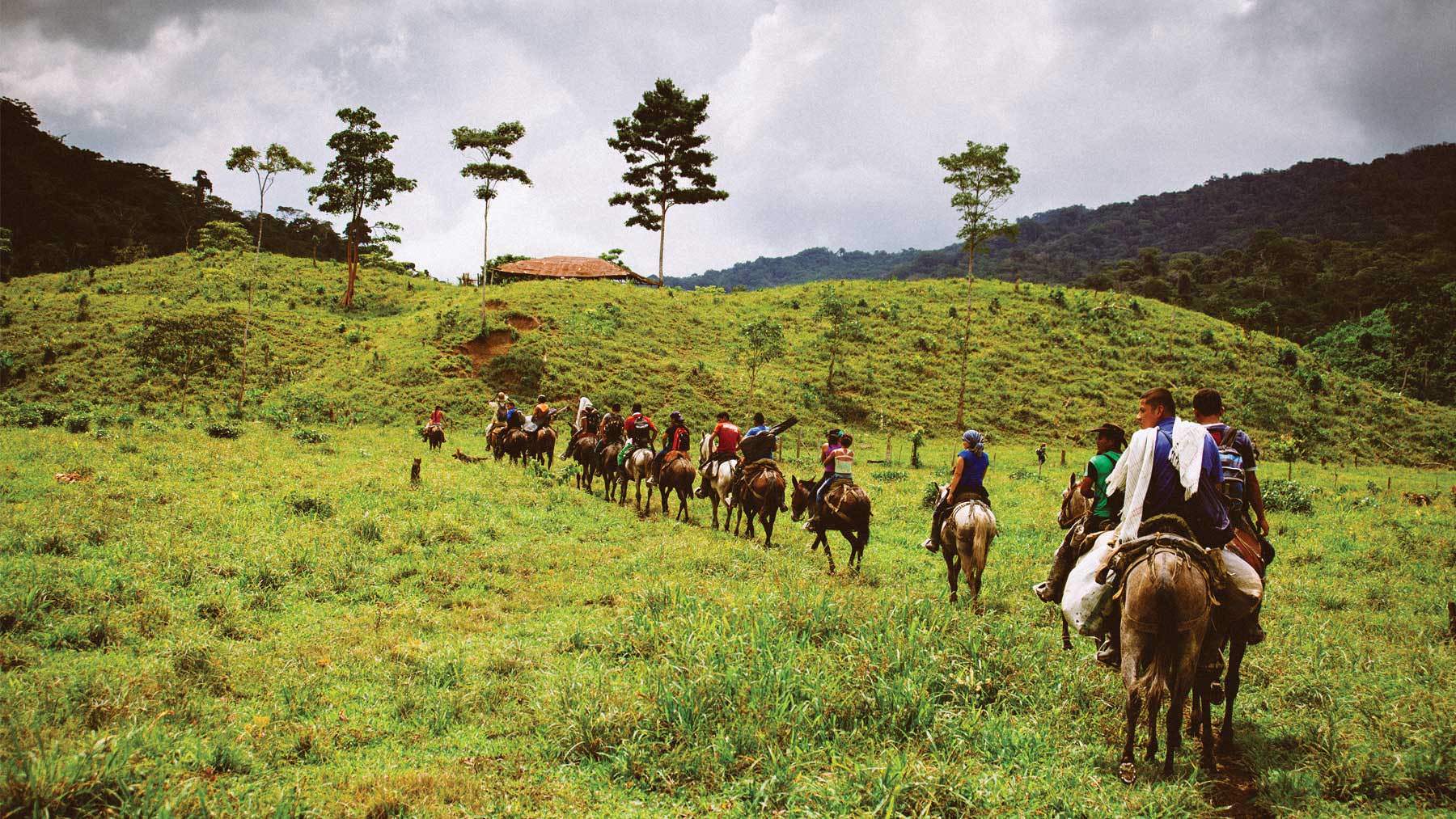 The Community is an extraordinary supplier; in spite of the ongoing conflict in the area, they continue to live peacefully and grow and harvest cocoa beans used in products like Charity Pot body lotion.

Jesús Emilio and Arley’s visit had been organised with support from the human rights organisation Peace Brigade International (PBI). PBI has been working with the Community since their foundation in 1997, with the aim of keeping the eyes of the world on the dangerous human rights situation in Colombia. They regularly send volunteer observers into the field to show solidarity, and these international observers are able to bear witness to the threats the community faces. This international presence is also a form of protection. “Without this, we would have been massacred,” explains Jesús Emilio.

The Peace Community was founded against a backdrop of violence and intimidation by the army, leftist guerilla fighters and right-wing paramilitary groups. A group of around 2,100 farmers pledged themselves to non-violence; all they ask is that those around them respect their right to peace and non-involvement in the conflict under international human rights law. The community also abides by a number of shared rules: not taking up arms; not associating with or supporting armed groups; equal rights for everyone; and not carrying any drugs or alcohol.

The conflict in Colombia, which goes back six decades, has roots in social and economic structural inequality. “In Colombia there is no right to land tenure, there is practically no right to be a home-owner, no right to education, to free healthcare, or any kind of decent healthcare. Education is also very bad,” explains Jesús Emilio. “At the Peace Community we try to ensure that every family has a house, has right to land, to somewhere they can grow crops to feed themselves. Our objective is to create a different world, a different way of living, with love for children, adults and old people.”

Perversely, in exempting themselves from conflict, the community has become a target for those seeking control of their land. They have lost 261 members - men, women and children - as a result. The murders, disappearances and multiple forced displacements have so far remained unaddressed and unacknowledged by the Colombian government, yet community leaders like Jesús Emilio and Arley continue to demand justice internationally. “The paramilitaries are still acting, ever more openly, supported by different State institutions, especially the police and army,” explains Jesús Emilio. “On November 18, 2013, the paramilitaries stormed one of the Community settlements, called Arenas Altas, and they took six people, five of whom were adolescents.

This is linked to the forced disappearance of the young farmer Buenaventura Hoyos on August 31, 2014 - whose whereabouts are still unknown. The situation is critical.”

In spite of this huge instability, the community has remained firmly committed to peace and they exist in harmony with their surroundings. They cultivate a variety of crops to eat and to sell including bananas, avocados, corn, rice, beans, plantains, and, of course, cocoa beans.

At their ecological research centre and Farmer’s University, the Community have developed ways of growing which incorporate permaculture techniques, such as mixed planting and composting, so they don’t need to buy pesticides and fertilizers. They also aim to be energetically autonomous, and are developing new strategies constantly, such as bio gas and solar panels.

On March 23, the Community will gather to celebrate their 17th anniversary. “For the Community, the anniversary is a great moment, a very deep and spiritual moment,” explains Jesús Emilio. “It is a special time because people from all the settlements that make up the Community, as well as other friends and allies, come to commemorate the occasion. Together, we remember all the years we have had, and look forward to the challenges that we must face.”

"At the Peace Community we try to ensure that every family has a house, has right to land, to somewhere they can grow crops to feed themselves."