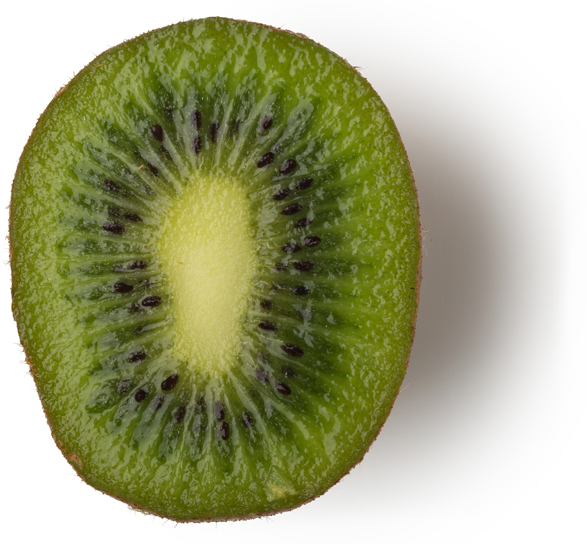 Much like pineapples (with bromelain) and papayas (with papain), kiwis contain an enzyme called actinidin that dissolves and removes dead skin cells. A powerful exfoliation that leaves the scalp and hair cleansed and shiny!

The kiwifruit history is unusual and quite recent. The fruit originates from China where it was known but not really consumed, except for medicinal purposes. It was not until the early 20th century that ‘plant hunter’ E. H. Wilson attempted to introduce it to Europe and the United States, where it had little success, but only as an ornamental. Meanwhile, seeds found their way to New Zealand, and the country saw commercial potential in the fruits. After calling them ‘Chinese gooseberries’ for a while, they came to rename them ‘kiwi’ in the 1960s, after their national bird whose feathers and general appearance is somewhat reminiscent of the fruit.

Kiwis are packed with vitamins and minerals. They contain more vitamin C than oranges, a good amount of antioxidant vitamins E and A, and potassium. This cocktail, associated with the exfoliating powers of the enzyme actinidin, maintains the skin and the scalp in healthy conditions.